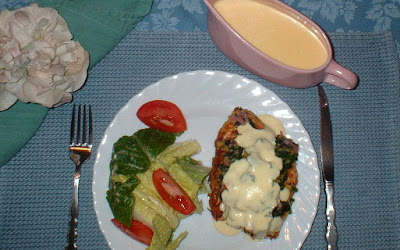 Big Sunday dinners are the norm in our house. Since we go to church for Vigil Mass on Saturday night, I have all day Sunday to cook. If the weather is cool or rainy I'll usually make baguettes, a loaf of bread or rolls from scratch. The following recipe came about after trying Roast Beef Roll Ups with Horseradish Cream from Desperation Dinners! We loved the sauce (although I cut some of the calories) but we wanted a more filling meal. In place of the proscuitto, we have also used capicola or pancetta.


In a small bowl- toss together cheddar cheese, cooked spinach and proscuitto. Set aside.
Sprinkle chicken with garlic salt and paprika to taste.
Cook chicken in non-stick oven safe pan until almost done. Top evenly with cheddar/spinach/proscuitto mixture. Bake for 7-10 minutes @ 350 degrees or until done. (OR Cook chicken until done - top chicken with spincach/cheddar/proscuitto mixture and place under the broiler until cheese is melted)

Sauce can be used to top chicken or served on the side.


Sauce- (can be halfed-we like a lot of sauce!)

In a glass bowl or large glass measuring cup, microwave butter until almost melted. In another bowl, separate eggs, beat well then mix with the milk. With a balloon whisk, temper these mixtures until combined. Microwave on high in 20 to 30 second increments, whisking mixture *violently* for a few seconds in between each cooking time. You've got to use a large whisk for this- a fork will not do the trick. The mixture will thicken in 3-6 minutes, depending on your microwave wattage. When the sauce thickens, add horseradish, hot sauce and garlic salt to taste. Serve hot- can be refrigerated and reheated.

*This sauce is tricky and tends to break until you get the hang of it. If it does break - keep beating it and it should come back together. Pampered Chef has a 2 qt glass measuring pitcher that is hands down *the best* cooking vessel for this sauce. The pitcher has a rounded bottom that matches perfectly with the whisk.
Posted by Leanna at 10:09 AM

Hi, Leana, thanks for stopping by & for taking the time to leave a comment about my 1 year anniversary! I really apprciate all of you who come by and visit. Please come back often!

Hi there! What a nice blog you have with such great recipes! Thanks for stopping by my blog yesterday. :)