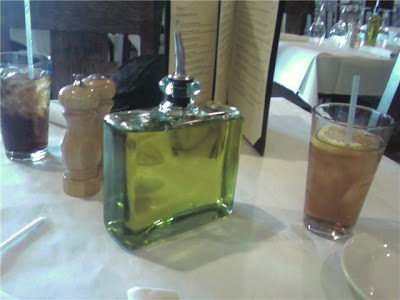 I was excited to read about the debut of the Chandler BBQ Throwdown for several reasons. First- I finally have weekends off after two years of weekend shifts. HuzBen and I are finally able to get out and enjoy some time together after having opposing days off. Second, Ben was employed for many years as a reporter with the Chandler Independent. He fell in love with the city back then and he rarely gets to see all the friends and contacts he made on his old beat. Third - Food! We love good barbecue and the combination of good BBQ and the beautiful AZ spring weather was too much to pass up. Also, our neighbors at Midwestern Meats were one of the event sponsors. I picked up my tickets there 2 weeks ago while doing the weekly shopping.

The first hurdle was the traffic. Once we arrived in downtown Chandler we found ourselves in a traffic jam of epic proportions. Arizona Avenue was down to one lane due to construction and it took us about 40 minutes to find a place to park that was almost a mile away from the event entrance. People were everywhere - this was going to be big!

The line to enter the event wrapped around the block. There was probably about a thousand people queued up at 1pm and tons more were making their way to the line. We thought it was odd that we saw almost as many people walking away from the event and going back to their cars. We found out why as we approached the ticket tent. There was no food. Yes ladies and gentlemen, we paid 20 bucks to attend a BBQ Throwdown that had no BBQ. We decided there had to be something for sale to eat, or crafts to purchase, so we soldiered on.

Since most people had not pre-purchased their tickets like we did, I made my way to the tent to ask where we were to go to get a wristband or something to let us in. Imagine my surprise when a teenage boy behind the table told me that my tickets weren't tickets, he had no idea what they were. Advertisements maybe? He questioned me about where I got the tickets and finally seemed satisfied that the guys at Midwestern Meats were on the up and up. He let us in and gave us our white coupons for the bbq tasting.

It didn't take more than a few seconds inside the event to see that people were not happy. No one knew what was going on. Vendors were packing up to leave by 2pm for an event that was suppposed to run until 9pm. A quick walk around also led to the realization that we had tasting tickets that none of the very few food sellers would accept. Want a hotdog? You can't use the white coupons, you need to go back and spend more money on red coupons. The only food that seemed to be for sale was hotdogs, beer, kettle corn and frozen fruit drinks. At least the frozen drink booth took cash. It was against policy but we were certainly grateful as there seemed to be not much else to drink and the line for beer was well over 100 people long.

We got luckier than most of the attendees when we found a booth for the Tiki Hut - one of the BBQ competitors. And yeah! They still had food. We spent all our coupons on their delish bbq beef rib tips and yummy brisket. Ben met some lovely people who were competing in the backyard bbq event. They couldn't accept tickets since they weren't a vendor but they offered free samples of their tasty bbq chicken.

For another 20 minutes we walked around the park. It was crowded and the people were hot, hungry and mad. There were barely any craft vendors to visit. The poor lady from the Cupcake Cafe was stuck right behind the entrance where she received little traffic. A real shame since their cupcakes are the best (she's at the downtown Mesa Farmer;s Market on the occasional Friday morning). Surprising in this land of strict smoking laws, there was a cigar booth right in the center of the park where people puffed away, oblivious to the ordinances that prohibit smoking at public events.

After finally deciding to cut our losses and leave we strolled through downtown Chandler on the way back to the car. The event's loss was downtown Chandler's gain. Every restaurant was standing room only. Some places were so packed that strangers were sharing patio tables, bonding over their experience at the BBQ Throwndown with no bbq.

We ended up having a fantastic meal behind the San Marcos Hotel at a little Italian restaurant called La Stalla Rustica Cucina. They certainly were not expecting to be flooded with business today but they handled it like pros. We had manicotti and their special margherita pizza with homemade mozarella. The awesome food, wonderful waitress and a relaxing atmosphere was much appreciated. While eating I checked Twitter and found that many of the foodies and locavores I follow had been turned away from the Throwdown. They were turning lemons into lemonade and meeting up at Joe's Real BBQ in Gilbert. Social networking saves the day - love it!

Jess Harter of the East Valley Trib blogged about the event too.
Posted by Leanna at 8:09 PM