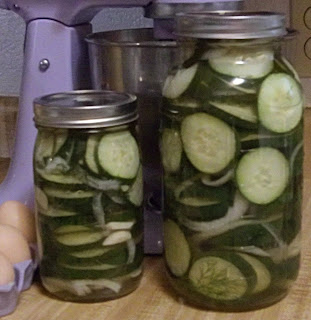 In a large pot, combine the vinegar, water, sugar and salt. Bring to a boil; cook and stir just until salt is dissolved. Place a sprig of dill in the bottom of each sterilized canning jar.

Pack layers of cucumber and onions tightly into the jars, leaving ½ head space. Place garlic pieces and dill sprigs into the jars and sprinkle with dill seed.

Pour liquid mixture into jars to cover the cucumbers. Move the cucumbers around with a knife to release any air bubbles. Make sure the liquid covers the cucumbers, onions and dill completely.

Cover tightly and refrigerate for 48 hours. Store in the refrigerator for up to 2 months.
Posted by Leanna at 1:12 PM