This year we decided to expand our veggie garden to the front yard. The big frost killed nearly everything so instead of cutting back we decided to rip out and replant. This year we have over 20 tomato plants, a mix of hybrids and heirloom varieties. I'm trying squash again since we had such a big crop last year. I even planted celery this year so it will be fun to see how that works out.
We have our big lettuce crop and tons of herbs for cooking too. As usual the plants that grow the biggest and the fastest are the weeds! 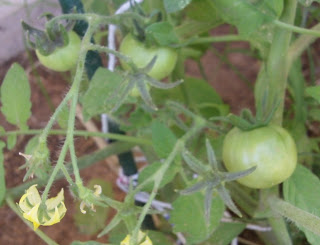 This is one of the tomatoes in the front of the house where the lantana had been for about 5 years. The lanata looked awful after the big frost and we decided it was time for it to go. Due to the lack of hours in direct sunshine- the lantana never bloomed much so it was just a big ugly bush. No great loss when we ripped it out. Like my neighbor proved last year, the tomatoes seem to like the front yard. We did minimal soil amending yet these tomatoes are doing much better than the plants in the main beds in the back yard. They get less direct sunlight here so maybe that's helping. There are peppers a few feet away and they seem to be growing very well too - a shock because I've always had a black thumb when it comes to growing any sort of pepper. I am the only gardener in Arizona who manages to kill off all my peppers every year. Most folks I know have the same bell or hot pepper plants for 3-5 years. I'm crossing my fingers for the red bells I planted last month. 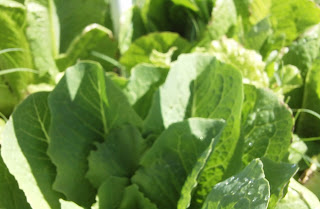 In the main raised bed we have our lettuce, at least until it bolts or we eat it all. This year I threw in some mixed seed packets. We ended up with some beautiful red speckled lettuce and a very hearty long green leaf lettuce that must be some sort of romaine. It is super crunchy and great on sandwiches. 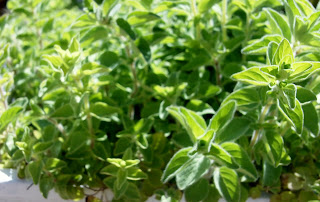 The herbs are really taking off after the recent rain. This is one of the pots of oregano. We added more oregano and parsley this year since we never seem to have enough. I finished the long overdue task of dividing the chives. I will never put that chore off again. The chives were so compacted that I ended up breaking them apart with a screwdriver. Most ended up in the garbage but the healthiest bulbs are now doing well in a bigger container. The sage is also beyond it's usefullness after 5-6 years so I planted some purple and some varigated sage. The older plants are now flowering so I hope to be able to harvest some seeds. I still have to decide where to plant the spearmmint and peppermint I purchased. We have a new wall of the southside if the yard so I want to see how plants do in that area before I commit. So far everything is growing well but that may change in the summer heat. 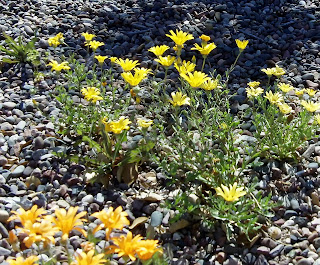 These are the last of the winter/spring desert wildflowers in the front yard. I was lucky enough to be home before the storms hit this weekend and I was able to gather seeds this year. I'd like to have flowers in the back yard next year so I plant them in the fall.

LOVE IT! i hope i don't kill mine lol

You've got a green thumb!!