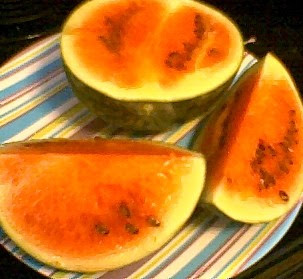 Breakfast from the garden - a baby watermelon

It is a beautiful morning, pretty hot but cloud free. Just perfect for making a roast in the solar oven which I've been trying to do since Tuesday. As soon as I woke up I looked out the front door then ran for the oven to put it in the back yard to pre-heat. I cut up the roast so it will cook faster. After sprinkling it with dry onion soup mix I poured about a teaspoon of bbq sauce on each piece. That's all you need to do and it makes a very flavorful roast with lots of juice you can use indoors on the stove to make gravy. Cooking times varies as do the cooking temperatures but it's usually about 2 to 2 1/2 hours.

The garden yield has slowed to almost nothing after all the very hot days we've had here in Mesa. Ben went to visit family in Tucson recently and we were lucky enough to be able to send some crook neck squash, zucchini and heirloom tomatoes to his mom. The tomatoes have stopped producing and the zucchini are much smaller. If you're used to seeing zucchini in the supermarket, that's about the size of the vegetables I am getting now. No more super sized veggies that made my coworkers laugh. The baby watermelons are still on the vine and doing well. The cushion of weeds they are sitting on sure helps to keep them from rotting on the ground. At least, that's my excuse for not weeding. :-)

We plan to add another raised bed in a month. It will be in a perfect spot so we can grow lettuce and tomatoes all winter. Also on the "to do" list is to remove all the soil from the big raised bed. Grass has taken over and quite frankly, the 10 year old soil isn't producing like it did in seasons past. Even though we add compost and manure yearly, it looks like it's time to make a fresh start. 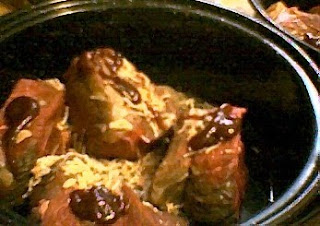 The roast ready to go into the SOS Sport Solar Oven

Another item on my list of things to get done was to get a good sour dough starter going. We love sour dough bread and liked the idea of making my own starter from scratch. I found everthing you need to know about sourdough here - http://sourdoughhome.com and I mixed my first starter on Monday night. It did well for 3 days, nice and bubbly with a good sour smell. Then it finally died yesterday. No bubbles, no rising, just mush. Our water isn't the best here in Mesa so I am guessing that it was the constantly changing chlorine levels that did it in. I'll have Ben pick up some Evian today and I'll try again. Ooh La La - French sourdough! :-)
Posted by Leanna at 10:01 AM

Hi, I love your blog. Very pretty. I love solar cooking and have both a GSO and a Sport. I'm glad to see the solar oven on your site.