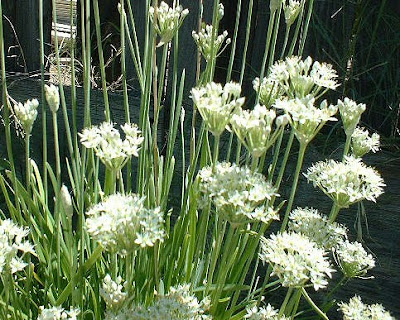 Now that the daily temperature should start dropping below 110 in the shade most days, it's time to start planning our winter vegetable gardens. Looking back on the last year it's clear that some changes need to be made. The tomatoes in the raised bed did not do well. The Big Boy and Early Girl tomatoes were the size of cherry tomatoes and the Sweet 100's were no bigger than marbles.

While we do change about half the soil in the raised bed each year, I think the nutrients are just tapped out. Tomato crops do best when rotated and we've been using the same raised bed year after year.

This coming winter we've decided to add a second raised bed for tomatoes, peppers and perhaps some squash. The older raised bed will be used for spinach, salad greens and herbs. Ben uses a lot of flat leaf parsley in his cooking and it will be nice to have a large amount of it, instead of a pot with 3 to 4 plants.

To make the new raised bed we are on the lookout for an old, inexpensive bookshelf. We'll just remove the back, tip it over, fill it with soil and voila - instant raised bed. Ben is checking out the second hand stores on 50% off days to see what we can find that will suit our needs.

I hope to pick up more large plastic pots too. The potted herbs did very well this year. The lemon balm has some toasted edges and the parsley went to seed in August, but the sage and thyme are loving all the heat.
Posted by Leanna at 5:14 PM